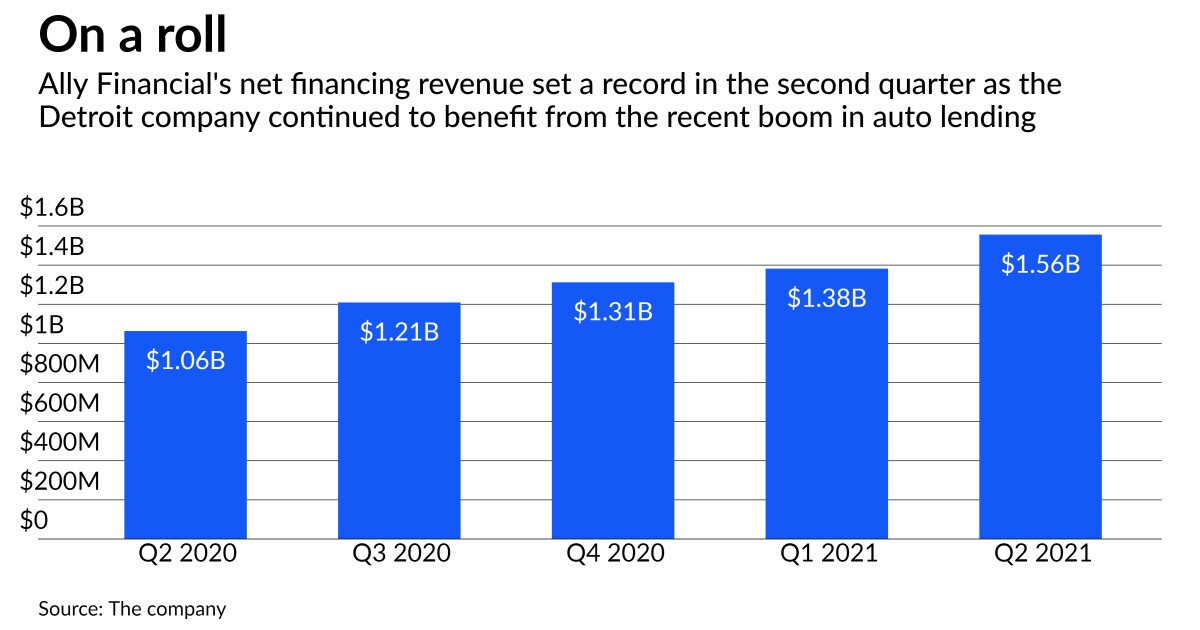 The red-hot auto market, which shows few signs of slowing down after a year in which prices soared, continues to serve as a rare source of loan growth for U.S. banks.

Ally Financial, one of the nation’s largest auto lenders, reported a record $1.55 billion in net financing revenue during the second quarter. It also made decisions on 3.5 million loan applications for the first time.

Ally Chief Financial Officer Jennifer LaClair predicted Tuesday that positive trends will continue, pointing in part to the company’s expectation that strong consumer demand for vehicles will be sustained.

“Our revenue has not peaked,” LaClair said during an interview, while also pointing to the company’s efforts to diversify its revenues. “We feel really good about the future ahead for Ally.”

The COVID-19 pandemic prompted an uptick in demand for vehicles just as supply chain problems were limiting the production of new cars. The result has been a sharp increase in used car and truck prices, which rose by 10.5% in June, marking the largest monthly increase since the Consumer Price Index began tracking those prices in 1953.

Strong demand for used cars should continue in the coming months, helping to limit a sharp drop-off in prices even if the worldwide microchip shortage, which has crimped auto production, abates, according to Jim Houston, who focuses on automotive finance at J.D. Power.

High used-vehicle prices benefit auto lenders largely because when loans go bad, and lenders repossess the automobiles, they are able to recoup more of their losses. The price trends are also helping auto leasing companies, which are also to fetch more money for vehicles when they come off lease.

Ally, where vehicle loans make up about 56% of total assets, has been an outsized beneficiary of the auto boom. Many banks have struggled to grow their loan portfolios in recent months, as elevated savings levels have prompted customers to pay off their debts. Banks have also seen their loan margins shrink amid persistently low interest rates.

But LaClair said there is a “bull case” for the auto market in which U.S. consumers shift toward cars and away from ridesharing and public transportation, continuing a trend that began during the pandemic. She also pointed to an aging pool of vehicles that consumers will need to replace.

LaClair also argued that Ally’s commercial auto lending portfolio should benefit from an increase in new car production. That part of Ally’s business, which focuses on helping car dealers finance their inventories, has lagged as auto production has stalled. Dealer floorplan totaled $10.8 billion in the second quarter, down 46% from the same period last year.

During the quarter, Ally recorded net income of $900 million, up from $241 million between April and June 2020, when the company’s provision for loan losses swelled by $287 million.

Ally’s results were bolstered by pristine credit quality, with the company reporting net recoveries of $6 million, as compared with net charge-offs of $178 million in the second quarter of last year.

Investors responded positively to the results, sending Ally’s stock up 6.09% to $50.90.

John Hecht, an analyst at Jefferies, credited Ally for planning for a tougher future environment, when lower auto prices will limit the size of loans and the value of vehicles that have come off lease.

“I think there’s a general perspective [among auto lenders] that the next quarter or two, we’ll continue to see these positive tailwinds,” Hecht said. “But I think everybody is eyes wide open or sober that next year … volumes can decline and used car values can normalize.”